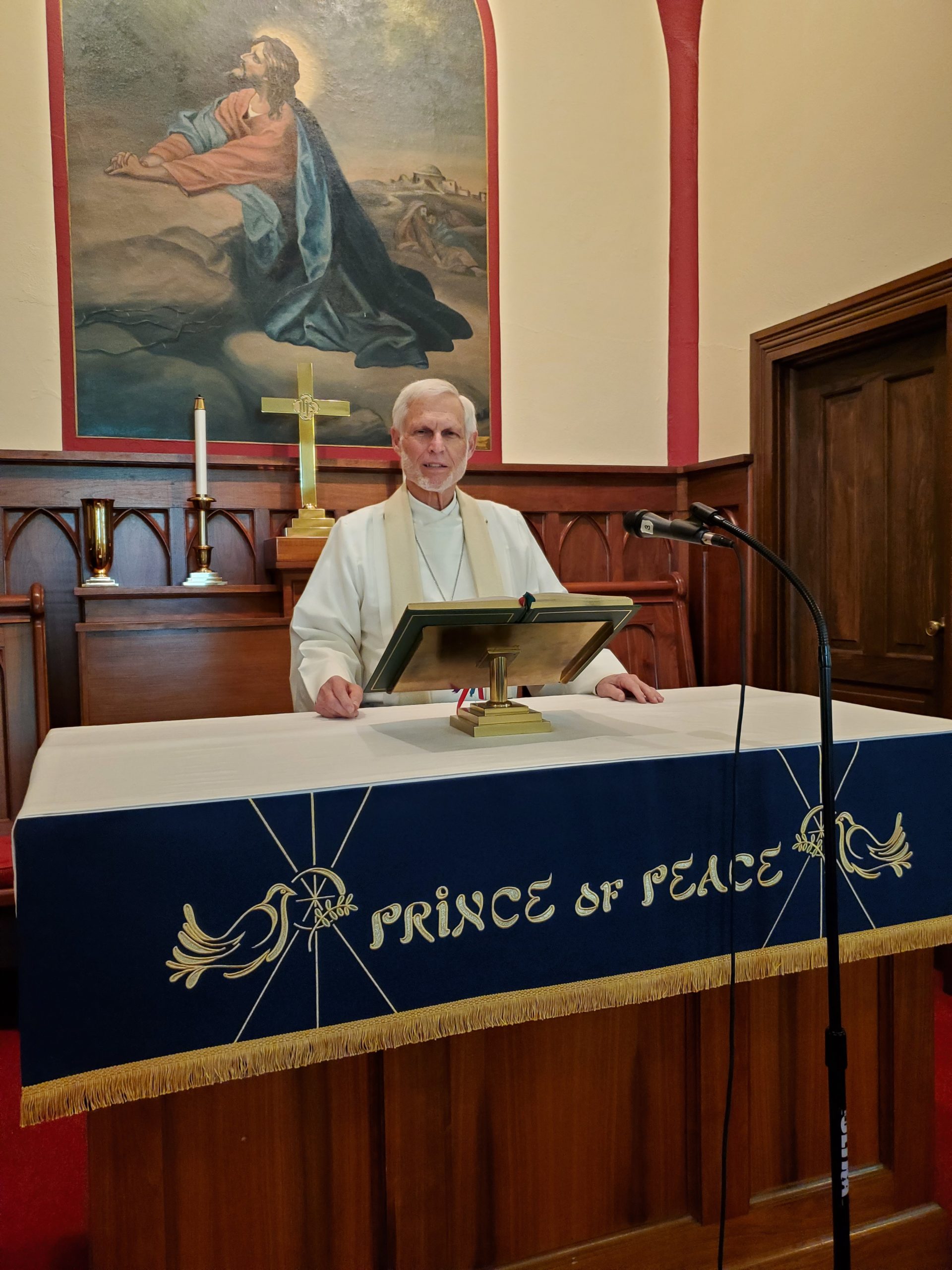 Sadly Pastor Clark passed away in September of 2021.   Pastor Eric Snyder is filling in until we find a permanent replacement.

Pastor David Clark, son of Pastor George A. and Maxine (nee Reitz) Clark, was born in Johnstown, Pa. While his father was serving as pastor at the Holtzschwamm/ Shiloh Lutheran Parish, in York, David attended kindergarten through 3rd grade at the Madison Avenue school in west York. In 1957 the Holtzschwamm/Shiloh charge dissolved and Holtzschwamm Lutheran (now called Paradise Lutheran Church) called George Clark to be their pastor full time. The family moved to Paradise Township to live in the new parsonage. While living in the township, David attended two one-room schools the last years they were used before the Paradise Elementary school was opened. During those two years, Mrs. Maxine Clark taught 4th grade in Paradise Township.

In 1959, George Clark was called to St. Paul Lutheran Church in Mundy’s Corner, near Johnstown, PA. From 1959 to 1965, David Clark attended the Central Cambria school system in Ebensburg, PA, graduating in 1965. He then graduated from Thiel College in Greenville, Pa. in 1969. That summer he married Tara Reighard, a classmate from Central Cambria, who had just been graduated from Slippery Rock College with a degree in Elementary Education. Tara worked as a teacher for three of the next four years, making it possible for David to attend the Lutheran Theological Seminary at Gettysburg.

Graduating in 1973 with a Master of Divinity degree and ordained to the gospel ministry in the Lutheran Church in America, David served as pastor of the Point Township Lutheran Parish (Trinity and Grace Lutheran churches), Northumberland, Pa. from 1973 to 1977. During this period, Tara played a key role in the establishment of a day care nursery at St. John Lutheran church in Northumberland. In 1977, the Clarks had their first child, a daughter Christy.

In July 1977, David was called to Evangelical Lutheran church in Waynesboro, Pa. He served Evangelical for 11 years, first as Associate Pastor for two years (during which time the Clarks had their second child, son Nathan) and then as Senior Pastor for nine years. Tara was again instrumental in establishing a congregational pre-school program, this time at Evangelical Lutheran. At various times during these 16 years of parish ministry, David served as co-chair of the Central Penn Synod Evangelism Committee, Dean of the Chambersburg Conference, and as interim pastor for 4 other congregations that were going through pastoral vacancies.

In 1988, the Clark family moved to the Biglerville area, as David began a new phase of ministry. He had been called by the Lutheran church to special service in resource development with Lutheran Social Services in South Central Pa, York. He served LSS-SCP for 3 years. He went on to serve in fund-raising positions at the Lutheran Theological Seminary at Gettysburg for 11 years, and Diakon Lutheran Social Ministries, Mechanicsburg, for 3 years. During this period of specialized ministry, he periodically served as interim pastor for another 5 congregations going through pastoral vacancies.

During this time, as always, Tara was hard at work, both in the home and, in the later years at several different businesses. Once again, her employment undergirded educational goals for her family. This was especially true, as the children moved through Gettysburg high school into college and the work force.

After 30 years of ministry, during an intentional leave from call, David worked as an Independent Financial Advisor, providing a full range of financial and investment services. He also served as a Senior Development Officer at Messiah College in Grantham, Pa, assisting alumni and other friends of the college in their financial support of the college.

Although still officially retired, he joined the staff of our synod’s Lutheran Camping Corporation in July, 2007, as the full-time Director of Development. He served in this capacity, raising funds for Camps Nawakwa and Kirchenwald and the Wittel Farm until December, 2012, when the development position was eliminated in a budget cutting process. Having enjoyed the part-time parish ministry with St. Mark over the past six years and being blessed by our Lord with good health, he notified Bishop Hoover that he was interested in serving as a fulltime parish pastor.

Early in 2013, the Bishop’s office recommended Pastor Clark as a pastoral candidate to Upper Bermudian Parish. After leading worship on two different Sundays, and meeting with the call committee/joint council, the congregations ratified the contract for pastoral ministry. Pastor Dave Clark officially began his service on July 16, 2013 as pastor of the Upper Bermudian Lutheran Parish. As detailed in the contract Pastor Clark will continue to serve St. Mark Lutheran Church in Heidlersburg (in a limited role) as their interim.